I’m a party planner. If you hire me, I’ll make sure there’s enough booze at your office holiday party, that your 5-year-old kid’s Paw Patrol birthday cake doesn’t look like Tom & Jerry, and that the rabbi doesn’t speak for more than 3 minutes at Joey’s Bar Mitzvah. Like I say on my website, I treat your affairs like they are my affairs.

Today, though, I’m sitting at the coffee shop, laughing to myself, and looking at email number seventeen in my email exchange from, I kid you not, Mary Jane Blount. Every time I see her email I feel like I need a weed hit. Anyway, she finally found a time we can meet. 3 minutes ago, to be precise. I wore a red blouse like she asked, so she would know who I was. Not that it helped.

Let me go back to the beginning. This has been going on for nearly a week. I was laying into a caterer at the Burk 25th anniversary dinner for bringing orange tablecloths after I specifically told him nothing in the red family, when I first heard from Mary Jane. She got my name from a friend, she wrote, and wanted my help to organize a little celebration for her book club’s 1-year anniversary.

I’m thinking tiny little quiches with mini saucers of tea shouldn’t be too hard to arrange, so I hit her back asking her when she wants to meet. Tomorrow at 4, she writes.

That’s no good for me. I already have a meeting at 3:15 across town, and then I’m flying back home as fast as I can because high-school-age babysitters think they can charge me $17 an hour to ignore my kid while they send selfies to their friends on Instagram. Anyhoo, I write back that I can do something after 8 PM if that works.

I ignored my phone for the next few hours to focus on Burk’s 25th anniversary. Can you believe someone invited the Glenda Thoms, the very woman who snubbed Edna Burk in Canasta 14 years ago? I was putting out fires all night. It wasn’t until the next morning that I saw Mary Jane’s timid email saying that she was sorry, but 8 PM just wouldn’t do.

It got buried beneath a mountain of other email, so there I was climbing into bed the next night skimming through the day’s mail when I came across mails 6, 7 and 8. She was getting increasingly desperate that we schedule a day to meet. Now, I can do without the drama, but I was intrigued by the party. Yes, it was for a bunch of lame book club broads, but Mary Jane claimed these ladies were reading some serious horror.

She was thinking black-colored cocktails, poison apples, and cake balls decorated to look like bloody eye balls. The scarier the better, she wrote in all caps in her last email, asking if I could find a way to meet at 4. Obviously, I missed that, and wrote to her twice, first apologizing and asking if she could meet the next day, and then, when I realized autocorrect had changed my response from “Hope to get together with you tomorrow” to “Hope to get tomatoes with you tomorrow,” I sent a smiley face with a sheepish correction.

Two more days passed before I received emails 11 and 12. The first asked if we could meet at a small coffee shop that she thought would be perfect for their get together, which was followed up 6 minutes later with her wondering why I was so bad at responding.

“Mary Jane, Mary Jane, you’re driving me insane,” I sang softly to myself later that afternoon when I wrote her back, offering to meet her at the coffee shop at 11 AM the next morning.

“WHY CAN’T YOU DO ANYTHING WHEN I ASK YOU TO,” came her shrill, immediate response.

I admit it. I was flustered. We were fourteen emails into our relationship and nowhere close to setting up a meeting. But I tried again. I wrote to her and apologized, almost sincerely, even though in my mind I was thinking this chick might be nuttier than a warm cup of peanut butter and asked again if we could meet at the coffee shop.

I didn’t hear from her for the rest of the day, though to tell you the truth, I was thinking about her and nearly forgot the spicy pickles I needed for an 80-year-old’s party that night. He’s a sweet old man, but when he doesn’t have his spicy pickles, he starts throwing his teeth at everyone.

I checked my email at a red light on the way home, and when I didn’t see anything from Mary Jane, I took one last shot. Anytime, anywhere, I wrote to her.

Which is why I’m sitting in the coffee shop, wearing a red blouse, and laughing at the woman who just stormed out. Mary Jane, I presume. She stormed into the coffeeshop with cup of coffee already in her hand and marched right up to a woman wearing a red blouse and sitting alone. Mary Jane started to scream at her, telling her the party was supposed to be last night. Then, she threw her cup of coffee at the poor woman, who jumped up screaming as a barista moved menacingly toward Mary Jane.

Mary Jane got away, and it looks like I did to. But lesson learned. I’m signing up for a meeting automation system today.

Discover how Book Like A Boss can shield you from unending email exchanges—and deranged clients—and help you schedule meetings that fit in your calendar.

You’re in! Now go check your email.
Oops! Something went wrong while submitting the form. 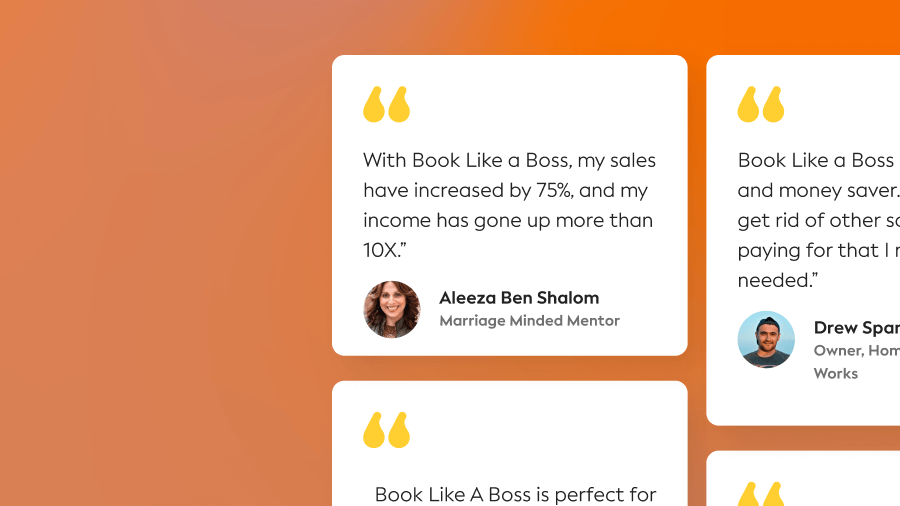 Does your bookings-based business have a strong review profile? We share tips on how to ask for a review and why this matters for business. 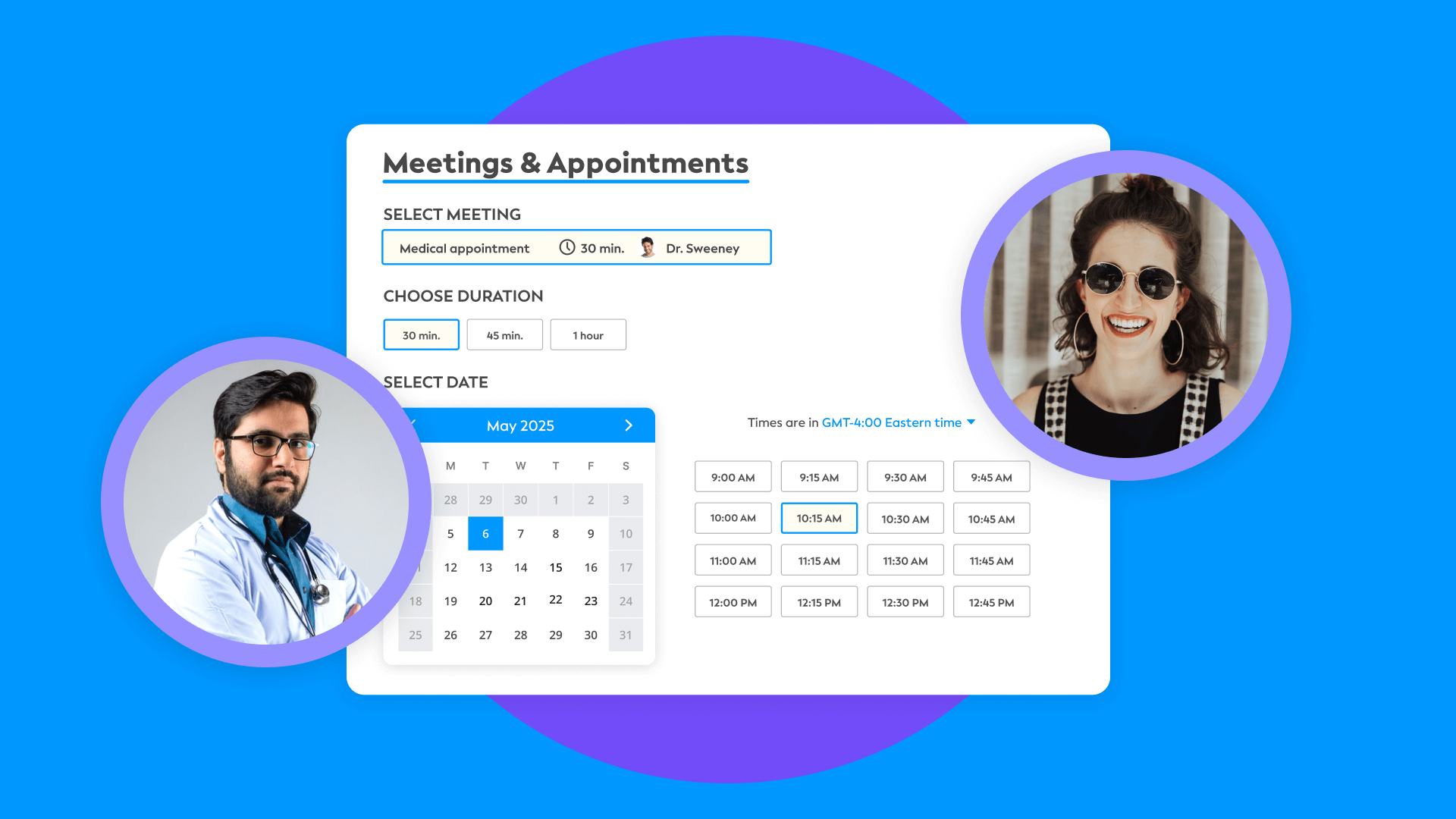 A list of ten key considerations to run through when choosing the ideal medical appointment scheduling software for your practice. 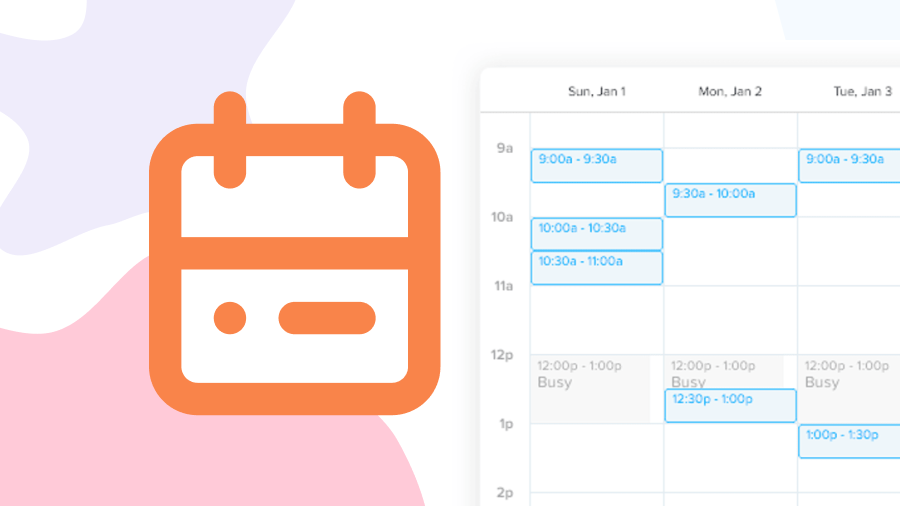 To become the master of time management, you might be weighing up Calendly vs Doodle scheduling tools. Here's the lowdown on both solutions!